The Merry-Merry Month of May

The month May was named for the Greek goddess Maia, known for her connection to the Roman goddess of fertility, Bona Dea. Unless you listen to the Roman poet Ovid, who claims the month of May is named for the maiores (Latin for 'elders'). And then there's Mayovka, a celebration born in the late Russian empire, where countryside picnics celebrated the merry first days of the month.

The emerald is May's birthstone--symbolic of love and success. The aromatic Lily of the Valley plant has become May's official flower, the harbinger of 'true spring.' May's zodiac signs are Taurus (through the 20th) and Gemini (May 21st and onward).

One thing you can rely on—all year long!—are exciting, poignant storylines presented by Harlequin authors. In May, I'll close out my “Those Marshall Boys” series with The Firefighter’s Refrain, featuring a Colorado cowboy turned firefighter who, after an on-the-job injury, puts his skills to use at the Nashville fire academy, teaching rookies what it takes to keep citizens—and themselves—safe. 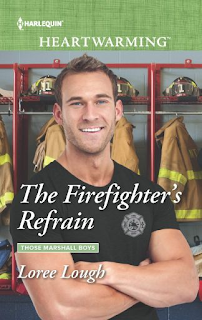 But wait, you say, why did this rugged cowpoke trade life on the family’s Double M Ranch for the hustle-bustle of Music City, USA? Well, it just so happens Sam Marshall is a talented songwriter whose guitar skills are rivaled only by his smooth baritone… Things move along according to his plan…until he literally knocks the lovely owner of The Right Note Café off her feet.


Once he dusts her off and sets her back on her feet, Finn Leary tries hard not to get lost in Sam’s apologetic blue eyes. But he’s a musician, she reminds herself, and she hasn’t met one yet—wanna-be-stars parents included—that can be trusted.


Does she have the willpower to keep Sam at arm’s length? And does he have what it takes to choose between a lifelong dream and the woman who could complete his life?


Just for fun, here's a sneak peek into the moment when Sam and Finn first meet…


The movements of a short-haired brunette drew Sam’s attention to the kitchen.
“Didn’t your mama teach you it’s rude to stare?”
“My luck,” he told his pal, “she’ll turn around and give me an eyeful of hairy moles and missing teeth.”
Mark snickered, then pointed at Sam’s leg, stretched out into the aisle. “There are better ways to find out than to trip her.”
Sam, too preoccupied with hopes that the waitress would turn around, barely heard the warning.
“So it’s still bugging you, is it?”
“Now and then.” Sam shrugged. “Not much.”
“How long since the last surgery?”
Sam did the math in his head. The ceiling cave-in happened in 2009, and he’d had two operations since. “Going on three years.”
Mark leaned back. “Are you gonna talk to somebody about it, or keep playing the brave, silent hero?”
“I’m talking about it now.” He leaned back, too. “Unfortunately.”

The waiter arrived with Sam’s iced tea, and taking a pencil from behind his ear, asked, “You guys ready to order?”
Mark hadn’t even glanced at his menu. “Turkey burger and sweet potato fries, house salad with lite Italian on the side.”
“Holy health food, Batman,” the kid said, “what’s got into you?”
“That crack is coming out of your tip, wise guy.”
Sam read the boy’s nametag. “Go ahead and laugh, Ted. I’ll get the tip. It’s worth every dollar to see this guy squirm.” He tapped his menu. “I’ll have a BLT, a side of curly fries, and coleslaw.” And when Ted walked away, he leaned forward and whispered “So what’s her name?”
Mark’s eyebrows rose. “Whose name?”
“The woman who put you on a diet.”
Waving the comment away, Mark said, “Can’t a guy cut back a little without his friends jumping to crazy conclusions?”
“So I take it ‘be my best man’ isn’t the reason I’m here.”
“Man. You’re like a puppy with a bone.” Shaking a packet of sugar into his already-sweet tea, he said, “All right, Mr. Impatience, here’s the deal: Duke Miller is taking Eli on the road.”
“No kiddin’? Well, good for Eli. It’s about time that brother of yours caught a break.”
After leukemia took his little girl, Eli’s heartbroken wife committed suicide, and he found comfort at the bottom of a bottle. Hard to tell how long he might have stayed there if Mark hadn’t made him an offer he couldn’t refuse: “Shape up and kick the addiction, and I’ll make you full partner at The Meetinghouse.”
“He leaves in two weeks. Just enough time to get his affairs in order.”
“Will Torry replace him as manager?”
“I’ll ask him, but he won’t say yes. He’s on the road more than he’s here in Nashville.”
Sam pictured Torry Martin, the big red-haired comic whose stand-up and movie career had taken off in the past year. “But Eli’s still your partner, right?”
Mark shrugged. “Therein lies the rub, Sherlock.”
“Wish I had a dollar for every time that line was botched.”
Mark looked up. “Huh?"
“For starters, it’s Shakespeare, not Sherlock Holmes…Hamlet, to be specific.”
“Gimme a break,” Mark kidded. “You know as much about the bard as I do. Which is zip.”
“Sez you.” Sam launched into the story of how, back in high school, the object his affections was signed up to play Gertrude in the annual winter pageant.
“Claudia’s family owned the ranch just north of the Double M, see, and I figured she and I might have a chance to get closer if I signed up, too, and offered to drive her to and from rehearsals.”
“Closer, huh?” Mark wiggled his eyebrows.
Sam ignored the disruption. “Claudia loved attention. Positive. Negative. Didn’t matter, long as people were looking at her or talking about her. She was a cheerleader. Recited the Pledge during morning announcements. Faked migraines and fainting spells in the halls, so guys would have to pick her up and carry her to the nurse’s office.”
“Figures you’d develop a crush on a girl like that.”
“I was young and dumb. What can I say? Anyway, it didn’t surprise anyone when she snagged the female lead. I read for the part of Horatio, thinking, fewer lines to memorize than Hamlet. But good old Mrs. Smith had other ideas.”
“No way….”
Sam nodded. “Yes way. You should’ve heard my cousins, mocking every line as I prepped for that part.”
“Well, at least you got the girl.”
Sam took a deep breath, let it out slowly.
“No way,” Mark repeated.
“Yup. I took all that razzing for nothing, since Claudia only had eyes for Bart Isaacs.”
“Captain of the football team?”
“Nah. His dad was a big shot in Denver politics.”
“Ah. Name-dropper, was she?” Mark took a swig of his tea. “But I didn’t just fall off the proverbial turnip truck, my firefighter friend. No way you’ll convince me you played Hamlet!”
Sam sat ramrod straight, and began:
“‘To sleep, perchance to dream: ay, there’s the rub. For in that sleep of death what dreams may come, when we have shuffled off this mortal coil, must give—’”
A breathy oomph, the shattering of plates, and the clatter of silverware hitting the tiles interrupted his monologue.
There on the floor beside him, amid broken dishes, tomato slices, and a jumble of golden fries, sat the most gorgeous woman Sam had ever seen. Dark, long-lashed eyes flashing, she glared up at him.
“Did it ever occur to you that sticking your leg out into the aisle might trip someone who can’t see over a serving tray?”
Posted by Loree Lough at 9:21 AM 13 comments: