In honor of fathers, everywhere... 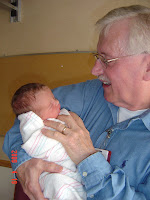 Who would’ve thought there’d be even a minor controversy surrounding something as simple as the origins of Fathers’ Day!

Some say the first was held on July 5, 1908 in a humble little church in , , while others insist credit goes to Sonora Smart Dodd who, in 1909 in another humble church in , decided while listening to a Mothers’ Day sermon that it was high time we honored our dads, too. By 1910, she’d convinced a few friends and neighbors to join her, and since her own sweet dad was born in June….

By 1913, a bill was introduced to make it an official national holiday, but few paid the idea any mind until President Calvin Coolidge put his considerable weight behind it in 1924. It didn’t take long for tie makers and greeting card manufacturers to figure out there was money to be made if they could convince the populace to quit makin’ fun of a day dedicated to Dear Old Dad. In the 1930s, a collection of trade groups formed a national committee, intent on legitimizing the sales…er…holiday. But it wasn’t until President Lyndon Johnson issued a proclamation in 1966 that the third Sunday in June was recognized as an official Federal holiday. Wonder if they knew that the Romans celebrated their dads every February? (The major difference…their tribute was for pops who’d passed away.)

Like so many things originated in the U.S., Fathers’ Day caught on in a big way, and these days, it is celebrated in Australia, New Zealand, England, Russia, Germany, Denmark, Ireland, and dozens of other countries.

Some fun (if not weird) facts about dads, compiled by the U.S. Census:

26.5 million…the number of fathers who were part of married-couple families with children younger than 18 in 2006;

63%...the number of children younger than 6, living with married parents, who were praised three or more times a day by their fathers. The corresponding number for children living with unmarried fathers was 57 % (from the U.S. Census Bureau????);

159,000…the estimated number of stay-at-home dads in 2006. These married fathers with children younger than 15 (which number approximately 283,000) have remained out of the labor force for more than one year to care for the family while their wives work outside the home.

30%...# of children younger than 6, living with married parents, who ate breakfast with their father every day. The corresponding number for children living with unmarried fathers? 41 %. What’s up with that!

64%...# of children younger than 6, living with married parents, who ate dinner with their fathers every day…while 66% of kids living with unmarried dads did the same. (I repeat: What’s up with that?)

It might surprise you to learn that the necktie really is the most common Fathers’ Day gift, and that the rose is the official Fathers’ Day flower. (Wear red if he’s living, white if he’s deceased).

So did your dad ever say:

My father told me that….

Do you think I’m made of money?

One of my all-time favorite “Dad” articles, written by the ever-popular and always-astute Erma Bombeck is titled “When God Created Fathers”:

When the good Lord was creating fathers, He started with a tall frame. And a female angel nearby said, "What kind of father is that? If you're going to make children so close to the ground, why have you put fathers up so high? He won't be able to shoot marbles without kneeling, tuck a child in bed without bending, or even kiss a child without a lot of stooping."

And God smiled and said, "Yes, but if I make him child size, who would children have to look up to?"

And when God made a father's hands, they were large and sinewy.

And the angel shook her head sadly and said, "Do You know what You're doing? Large hands are clumsy. They can't manage diaper pins, small buttons, rubber bands on pony tails or even remove splinters caused by baseball bats."

God smiled and said, "I know, but they're large enough to hold everything a small boy empties from his pockets at the end of a day yet small enough to cup a child's face."

The angel nearly had a heart attack. "Boy, this is the end of the week, all right," she clucked. "Do You realize You just made a father without a lap? How is he going to pull a child close to him without the kid falling between his legs?"

God smiled and said, "A mother needs a lap. A father needs strong shoulders to pull a sled, balance a boy on a bicycle or hold a sleepy head on the way home from the circus."

God was in the middle of creating two of the largest feet anyone had ever seen when the angel could contain herself no longer. "That's not fair. Do You honestly think those large boats are going to dig out of bed early in the morning when the baby cries? Or walk through a small birthday party without crushing at least three of the guests?"

And God smiled and said, "They'll work. You’ll see. They'll support a small child who wants to "ride a horse to Banbury Cross" or scare off mice at the summer cabin, or display shoes that will be a challenge to fill."

God worked throughout the night, giving the father few words, but a firm authoritative voice; eyes that see everything, but remain calm and tolerant.

Finally, almost as an afterthought, He added tears. Then He turned to the angel and said, "Now are you satisfied that he can love as much as a mother?"

And the angel shutteth up!

In closing, here’s a poem I’ve long enjoyed that sums up Dads in just a few short lines. I hope you’ll enjoy it, too:

What Makes A Dad

God took the strength of a mountain,
The majesty of a tree,
The warmth of a summer sun,
The calm of a quiet sea,
The generous soul of nature,
The comforting arm of night,
The wisdom of the ages,
The power of the eagle's flight,
The joy of a morning in spring,
The faith of a mustard seed,
The patience of eternity,
The depth of a family need,
Then God combined these qualities,
When there was nothing more to add,
He knew His masterpiece was complete,
And so, He called it ... Dad

To my dad, to the father of my children, to men everywhere who (sometimes) respond when kids say “Dad?”, HAPPY FATHERS’ DAY!

Oh...and that adorable guy in the picture? My own sweet hubby, holding our then-one hour old grandson, Warner. Now that is what Fathers' Day is all about!