Ack! Is it that time of year...already!? 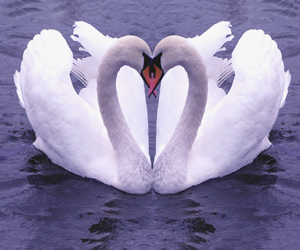 Well, can you believe it... another Valentine's Day is upon us. With 22" of snow outside my door, I think you'll understand why I'm grateful that Larry and I have never gone in for extravagant February 14th celebrations. A meaningful card with a thoughtful verse inside, a box of chocolates (from him to me, of course), a favorite meal (from me to him...seems only fair!) and we're one happy duo.

Curiosity prompted me to 'Google' the date, and whoa, did I discover some interesting stuff...including a whole long list of Anti-Valentine's Day web sites with one purpose: To erase the date from the calendar...at least as a 24 hour love fest.

So I got to thinkin' that maybe if we all focused more on the history of the holiday than the crazy commercial side of it, we'd have an easier time...celebrating....

Let's keep in mind that it started out as a pagan tradition, way back in the third century. Now, anyone who knows me well understands how fond I am of canus lupus. There weren't many like me back then, when ravenous wolves lurked Rome's borders, hoping some sleepy shepherd had nodded off so they could grab a free meal. So the shepherds called upon the god Lupercus to protect two- and four-legged from fang and claw. The Feast of Lupercalia was celebrated every February, to ensure Lupercus's continued guardianship over themselves and their flocks.

As part of the feast, Romans honored the goddess Juno Februata by putting girls' names into a box, so they could be partnered with young boys, and they'd walk around holding hands and looking google-dee-eyed at one another until the next feast. This practice continued long after the wolves left Rome for better pickins.

Then along came Christianity, when priests made it their business to stamp out such heathen practices. In place of the partnering ritual honoring Juno Februata, church big wigs renamed the feast St. Valentine's Day and substituted saints' names. Kids of both sexes pulled slips of paper from boxes or urns, and the name each chose was the saint they were supposed to emulate until next St. Valentine's Day.

Alas, we're a weak-spirited bunch, we humans, and by the fourteenth century, we'd reverted to 'girls only' names yet again.

Depending which version of history you read, there are as many as seven men who went by the name "Valentine", and one or all are linked to various feasts, celebrated on February 14th. It's interesting to note that only two boast stories interesting enough to give lasting meaning to St. Valentine's Day.

Valentine Number One was well-loved by all...at the worst possible time in the reign of the Emperor Claudius. See, old Claud was having big trouble finding soldiers to fight the wars he'd started, hither and yon, seeing as the able-bodied went all gooey at the very thought of leaving wives and kids and sweethearts behind. Perturbed by this chronic gooey-ness, the Emp ruled that no marriages could take place until all warring had ended.

The well-loved Valentine One didn't become well-loved for no good reason.... Soon, word got around that he was more than happy to thumb his nose at the ridiculous ruling by performing secret marriage ceremonies. If Claud was ticked when he couldn't round up willing fighters, imagine how enraged that news made him! He tossed Val One into prison, and left him there until he died...on February 14th. Lest it be said the Emperor wasn't all bad, let us remember that he allowed Val's friends to cart off his remains and bury them in a Roman churchyard.

And then there's Valentine Number Two, thrown into jail for helping those annoying Christians. Whatever was he thinking, curing a jailer's daughter of blindness while behind bars! Yep, Claud got word of that, too, and since Val Two was already in prison, what choice did he have but to club the poor miracle worker to death, then chop off his head...on (you guessed it) February 14, 269 A.D. (Ugly rumors persist that the real cause of the Emperor's fury was that instead of a cure for blindness, Valentine stole the heart of the jailer's daughter, and wrote numerous letters signed "From your Valentine.")

Eventually--much like the so-called history books in today's American classrooms--the seven Valentines got rolled into one, and in the year 496, Pope Gelasius proclaimed February 14th the day to honor St. Valentine, who either performed the miracle of giving sight to a sightless girl...or infused her heart with everlasting love....

And so it was that the collective Valentines became the patron saints of lovers. As Christianity became more prevalent, priests continued to replace old heathen practices.

So, you ask, how'd we get from prayerful reverence to cards, candy, and flowers?Well, remember those letters that may have been signed "From your Valentine"?

And how the practice grew! These days, a billion Valentine cards are exchanged every February 14th, making it #2 in card sales to Christmas. I find it tough to believe that 83% of those cards are purchased by women, but that's what statistics say....

Because Valentine's Day is responsible for a whopping 32% of their annual sales, florists love the holiday. And here's a stat I do believe: 73% of posie purchasers are men. 110 million roses (mostly red) will be delivered to sweethearts on or slightly before Throbbing Heart Day.

Which brings us to the question, Why red? Well, it's the symbol of warmth, passion, and love. And since all that stuff inspires the ol' ticker to tock, it wasn't a great leap to adopt the 'shape' of the heart as the universal symbol of love.

But...why all the heart-shaped stuff? For the answer to that, some historians hearken back to the ancient Romans, who borrowed the symbol from the Babylonians, for whom "bal" meant "heart", and "bal", don't y'know, was a symbol of Nimrod, Lord of the Babylonians...aka Cupid...often depicted as an adorable li'l guy whose bare butt is, well, sorta heart-shaped. (What can I say? There were no video games back then, no TV, no movies. People's imaginations were way out there!)

On a final note, may I humbly point out that Alexander Graham Bell decided to patent his oh-so-famous invention on February 14th, 1876.So pick up the phone. Call your mother, and wish her a happy Valentine's Day!

And a Happy Valentine's Day from me to you, my treasured friends!