Well, folks, ready or not, it’s Halloween! For some of us, the day tops “Start Christmas Shopping” lists, which makes money managers frown … unless their jobs include balancing the budgets of department and discount stores.

One thing these big thinkers agree on is that all this partying took place in the late fall. No big surprise there, since that’s when harvesting happened, even in the good old days. 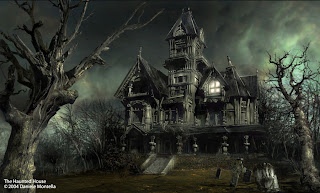 While Hanna Montana wigs and Buzz Lightyear domes are relatively recent additions to the costumes we’ll see tonight, but there’s nothing new about this “tricking and treating” stuff.
Some historians insist that the holiday’s roots are so long that they reach back to the time of the Celts, who, more than 2,000 years ago celebrated the pagan festival “Samhain” (“sow-in”) that included the offering of sacrifices to ensure healthy crops in the coming year.
Other researchers claim it’s a Roman “harvest festival” thing called “The Pomona,” which quickly gave way to the more popular “Feralia” … another carnival of sorts involved lots of sacrificing and (gasp) death.


Then, in A.D. 600, a guy in a pointy hat (Pope Boniface IV, to be specific) decided that all Christians must remember all martyrs, and picked a random date that more or less correlated with the revelry. Pope Gregory III agreed and, not to be outdone, put his official ruling into place by establishing an official date and title. And what better way to honor those saints than by jump-starting the prayers on the hallowed eve of All Saints Day!

But, with all that livestock slaughtering and toga bleaching to do in preparation, it must have seemed like an incredible waste of time saying “all hallow’s evening.” And so, the human race, with its perpetual need to abbreviate, can be credited with the name that stuck: Halloween.
Another trait of human beings is ... we can't seem to leave well enough alone. Perhaps this is why, a couple of centuries later, yet another pope (whose name escapes me) drafted yet another ruling that encouraged folks to remember everybody who called Paradise home: November 2 was then known as "All Souls Day."
But never fear, ye Christians, we are not alone in our desire to remember, honor, and even celebrate the dead:
Mexico and both observe El Día de los Muertos (Day of the Dead). It’s called Dia de los Natitas (Day of the Skulls) in , but, potato-potahto …. And let’s not forget the much-touted Ghost Festival, celebrated all across . calls their “day” Gia Jatra, and it’s Araw ng mga Patay in the .


It wasn’t really as weird and maudlin as the names make it sound. The common thread in it all is man’s need to acknowledge and seek forgiveness of his sins. Giving up things of value (ala animal sacrifice), it was hoped, would prove to God that feeble humans—despite the deeds that told Him otherwise—had a genuine desire to do better in the coming year, and, garbed in “o woe is me” outfits, they proved it by making painful sacrifices.


Thankfully, we’re no longer required to sacrifice our cows and lambs to atone for our sins. Yet I know a lot of devout believers (of many faiths!) who refuse to partake in “wicked Halloween rituals.” But is this holiday really so “evil”?


I contend that it isn’t …provided--as we don our clown noses and pirate sashes—we remember our ancestors’ original (if not naïve) intentions, and the ultimate sacrifice our Lord and Savior made that day on the cross.